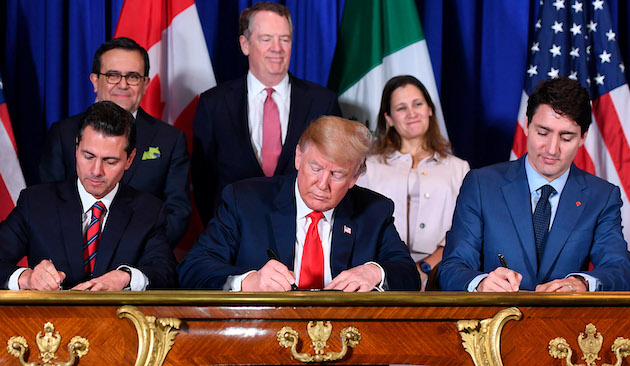 TOPSHOT – Mexico’s President Enrique Pena Nieto (L) US President Donald Trump (C) and Canadian Prime Minister Justin Trudeau, sign a new free trade agreement in Buenos Aires, on November 30, 2018, on the sidelines of the G20 Leaders’ Summit. – The revamped accord, called the US-Mexico-Canada Agreement (USMCA), looks a lot like the one it replaces. But enough has been tweaked for Trump to declare victory on behalf of the US workers he claims were cheated by NAFTA. (Photo by SAUL LOEB / AFP) (Photo credit should read SAUL LOEB/AFP via Getty Images)